We were talking nonsense while sipping a lemonade or two and munching some very nice Springbok droëwors. Amongst the regular banter was how nice it was that we can at least blank on a new beach. We decided a while ago to fish other spots than the usual places we always go to. And since we have been catching nothing at our regular spots anyway, we might as well blank at a different location every other weekend.

Last week we were on the Walker Bay Fishing Trail hoping for a pull. The only thing however that got pulled were our grapnel sinkers in the strong side current. You have to have a 4×4 though if you want to reach all the best places. We had a “pour by pour” and still got stuck at some places. I have to say, the place has potential. We only fished Die Polle and Sopiesklip without luck, but I have heard of nice catches at times. We didn’t even have time to see Groot Duifklip, Klein Duifklip and Mierkom, places known for Steenbras. It’s a stunning part of the coast that will definitely see me again. Especially Sopiesklip… I can just see myself, rod in water, sun going down, having a “skelm sopie” of whatever warms my insides…

This weekend we decided to try another new spot. Kleinmond beach towards Hawston was our destination for the past Saturday and we were targeting Steenbras with fresh Bloodworm. It was almost half past twelve and the tide was pushing but none of us had even had a nibble. Funny how the Hangklip hotel always make its appearance on days when fishing is slow. Well, the suggestion was made and the decision taken that if nothing happens within 30 minutes, we will go “hang” in the shade of the Hangklip.

My lemonade went left and my droewors right in my attempt to get up fast enough to rescue my rod from a certain swim. My rod had dipped and the tip was almost touching the sand as the Steamer took off. I made a dash for my rod and picked up what felt like a really really heavy fish. The Spheros 10 000 was loosing line quickly, but I knew there’s a good 600 meters on the reel and no Steenbras can spool that. The fish came to a brief stop, hanged in the current for a second and went onto his second run. Awesome Stuff!

I decided to walk backwards onto the sand dune behind me to get some elevation on the fish. There was a big sandbank in front of me that I had to get the fish over. With the support of some helping waves I got the fish onto the bank and thought he was won. He had other ideas though and was off on run number three. This was an even longer run than the second and I knew this fish was over the 10kg mark. One of those trophy Steamers that the old ballies talk about on late nights next to the braai.

The fish would go on a run then pause and give me some nice head nods. I said to the guys this can be a Kob as well from the bumps I felt on my rod. It was me, my trophy and the sandbank again, but luckily I turned the fish without too much effort to get him onto the bank. With each rolling wave that rolled towards me I brought the fish closer. Next moment I saw a fin shimmering in the sun. I thought it must have been the pectoral fin of a huge Steenbras lying on his side…

It turned out to be the dorsal fin of a Spotted Gully shark. I have to admit, it was a little disappointing at first. You don’t throw a bloodworm on a working sandbank in Steenbras country and expect to catch a Spotty. The disappointment was quickly washed from my face with laughter when my buddy tried to drag the fish out on its tail.

Fcuk it was funny! By his tenth attempt I decided to put my rod down and try myself. Luckily it only took me three attempts, since I had a mouthful with him struggling so much. The Spotty was big! I haven’t caught a lot of them but this is by far my biggest ever at 178cm, thats roughly about 30kg’s. Taking the hook out was another little wrestling match with a perfectly timed wave breaking over us to cool as down.

She turned out to be a pregnant female. How do I know she was pregnant? I don’t, I just assumed, but she was either preggies or a bit of a porkie. I gave her the benefit of the doubt and after a few quick snaps I returned her to go and have her young peacefully sometime in the coming weeks, I think! 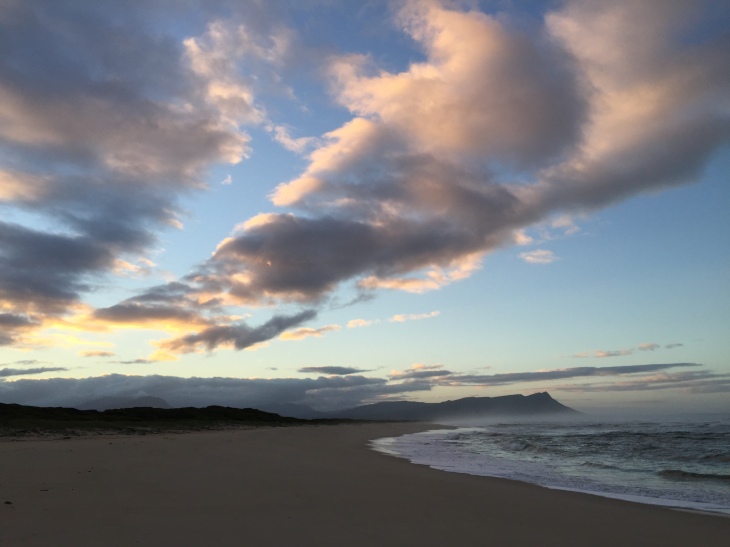 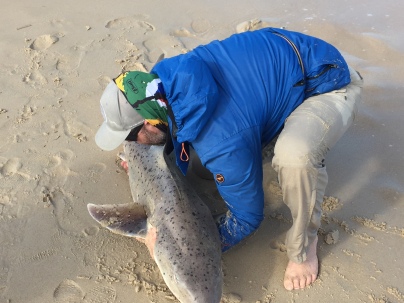 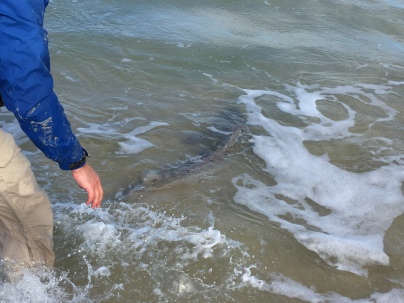 One thought on “Spotted Steamer”