You might ask what the random “vygies” (flowers) used as the cover picture has to do with fishing. But I specifically used that picture to show that I too have a sensitive and artistic side and this blog is not all about fishing 😉 ! I took the pic on our way back from our fishing hole early Saturday morning. Then with the PS Express App I used the Haze filter to enhance the colours, “mooi nê”…  Ja ja ja “beauty is in the eye of the beholder”, I know!

Anyway, back to fishing. In trip 1, I introduced the ABC gang. We communicate often on WhatsApp and by now we don’t really have names anymore. We are simply called J, D, B, Q & Brett… Brett is to big to be called by one letter in any case, plus I already claimed B. We are all different characters from different backgrounds and that contributes to a tremendous amount of fun and sometimes chaotic comical relief.

We were suppose to leave at 14:00 on Friday but because Laurel & Hardy was late as always we only drove out of Somerset West at 15:00. Luckily Brett promised to make up time on the road and we drove into Witsand at 18:15. After quickly unpacking we went off to the river to pump some mud prawns to use for bait on the Saturday. Must say, it helps if there is more than one guy doing the pumping. It took us less than twenty minutes and we had enough Grunter bait for the next day.

After assembling our gear we were off to the water for a quick lure session. Brett still had to spool his reels and with me ducking and diving the offer to help I just sort of slipped through the the back door on my way to the Breede. D joined me and after a brief walk our paddletails were hitting the water. It started drizzling but that didn’t stop me, I persisted and was rewarded with a healthy looking 50 cm Kobbie. It got to almost 20:30 and I was forced to stop, being a law abiding citizen and all. The evening was spent laughing and braaing with only the odd sip here and there…

When the alarm started blaring at 4:00 on Saturday morning we were up and running. We slurped our coffees and set off to our planned fishing destination for the day. It took me one throw with the net and we had about 30 mullets to use as live bait. Our hooks were baited and the livies were in the water in no time. Nothing happened at first but then my rod dipped and the Stradic 5000 FK gave a brief scream, sadly the circle hook didn’t set. When I reeled in the livie, he had tooth marks all over his body, a sign that the Kob were on the prowl.

Then D’s very light Grunter rod folded and the reel started complaining. He was using prawn as bait but this fish wasn’t showing Grunter behavior. After a brief fight he landed a nice river Kob of 53cm. Brett was next to do the river bank dance when his fish took him for a walk, he landed a 51cm Kob. On the Breede the Kob needs to be 60 cm in size and the above fish were returned.

After the first couple of runs it went a bit quiet and we decided to move back to the spot where we got the livies earlier in the morning. By then it was about ten, and the lure of thumb is that by then your window for Kob is over. They usually hunt early in the day and late in the afternoon. We couldn’t have been less bothered and rebaited our hooks. It wasn’t long and D was in again, this time a better fish of 63cm. I only managed a couple of really small kobbies on prawn in the 15cm range! Q was next in line and he landed a 60cm fish.

By now I was thinking how typical this is. I brought the gang to the spot, threw the livies and now I am on my couch watching the fishing channel, again. I can’t help it, I don’t know if it’s from my sporting days but I always have to catch the most and the biggest fish. Don’t get me wrong, I enjoy watching my mates play and catch fish and I’m the first to leave my gear to go and grab, or dive after their fish. But, I still get jealous and can’t help but think why it couldn’t have been me. I smile and I wave but deep deep down my competitive spirit is having a panic attack.

The fish seemed to move in shoals. If one guy got stuck into something, it wasn’t long before the next guy was running to his rod. D just landed another fish of 69 cm when my reel eventually started screaming. After a lekker fight I landed a really healthy looking of 86 cm Kob. This made me feel a lot better and all of a sudden the swag was back in my step and my face was one big smile again.

Ten minutes later I saw my other rod getting an inquiry. I ran over, picked up the rod and the fish started taking line. While I was fighting the fish my other rod to my left started screaming as well. With my right hand I held onto the one rod and picked up the other with my left hand. There I stood with a rod in each hand, both with fish on, and another flapping on the side. Ten minutes earlier I was still moaning and growing on the inside… Things can change that quickly!

I shouted for help and both Q and D came running, about 50 meters from my left and right. Which one do I fight first? I passed the left rod to Q and asked him “nicely” to just keep the line tight, but not to reel, its my fish! I played the right fish nicely, but all of a sudden my livie appeared with someone else’s yellow line wrapped around my hook. I was a little confused for a second but then released it wasn’t my fish I was fighting. The right fish turned out to be the wrong fish!

I passed my rod to D and proceeded by hand lining the wrong fish to the side. Next thing he turned around and swam off with some speed and the leader knot popped. It was about then that D realised that I was holding his line in my hand  and that it was actually his fish that I just lost. His reel was on free spool and the fish picked up the bait and gently swam a good 50 meters to the left before getting tangled in my line. I took my rod from Q and this time at least it was my fish I was fighting. Since he was already a bit tired he was on the side in no time. Also a stunning 51 cm Kobbie. He got a quick tag and release for his trouble.

How is this for a “grootvis storie” (fishermens tale)… About two hours later D got stuck into something again and the fish gave him some stick. After he landed it we saw there was another line hanging from its mouth. After inspecting the line, D realised it was the same Kob that swam into my line and that I lost earlier when the leader knot parted. Same trace and hooks, unbelievable! I guess when its your day its your day (or not if your the Kob)…

I couldn’t help but wonder if Kobus was still lurking in the deep and whether he is enjoying the lip “ring” I gave him. Who is Kobus? He’s the big fish I lost a couple of weeks ago that is still giving me nightmares. All dams, or rivers in this case have a Kobus Wiese and if it’s your day you will be lucky enough to have your selfie moment with him.

Later in the day Q caught a 63 cm Leerie, but after that it went completely quiet. I was hoping that towards the evening something would happen but it was dead. Between us we caught 13 fish over 50 cm for the day, with the biggest being a Kob of 86 cm.

Sunday morning was a pearler! Windless, cloudless but unfortunately also fishless for us! I had a run on my first cast but that was the only bite we received the whole day. The only thing we caught was a couple of buss mullet with the throw net. Some of the guys with the boats on the river seemed to get stuck into big fish. We witnessed a stunning Grunter being netted right in front of us. The angler was on a paddle ski and literately got pulled around by the fish. I was sure it was a big Kob, but it turned out to be a enormous Grunter. He said he caught one earlier of 78cm, this one was certainly in that range if not bigger, an absolute beast of a Grunter. They were using prawn as bait, we decided earlier to leave the pump at home and only focus on Kob for the day…

When we drove out of town I was already making plans to return… The place is like a drug and I am very very addicted! 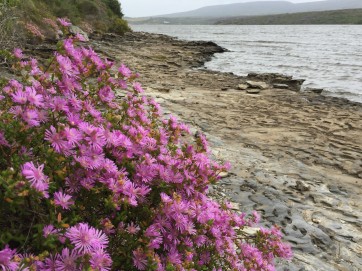 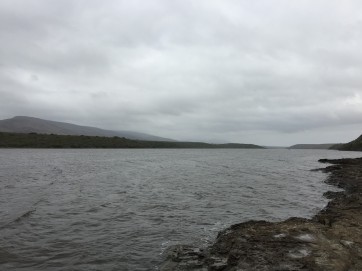 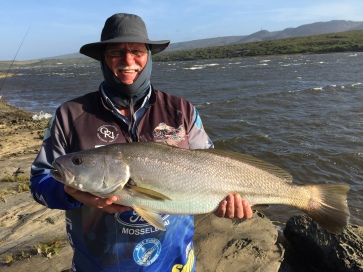 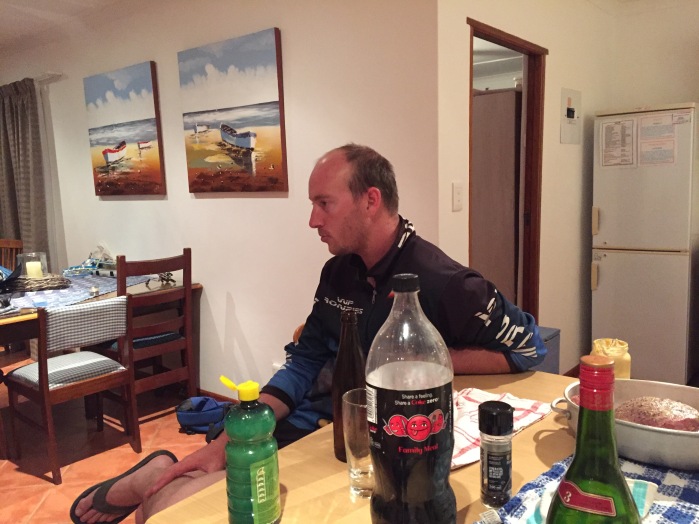 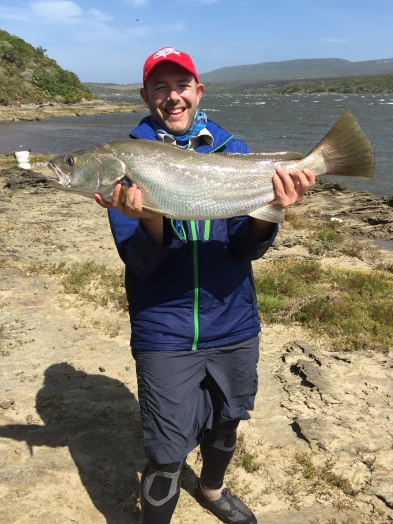 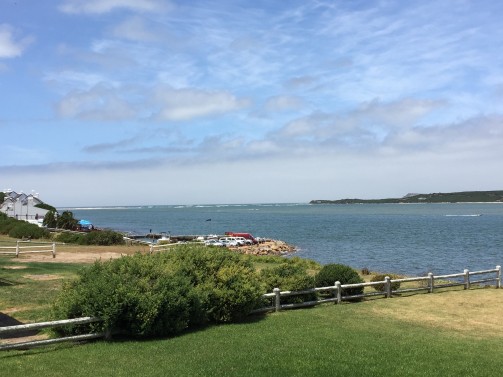 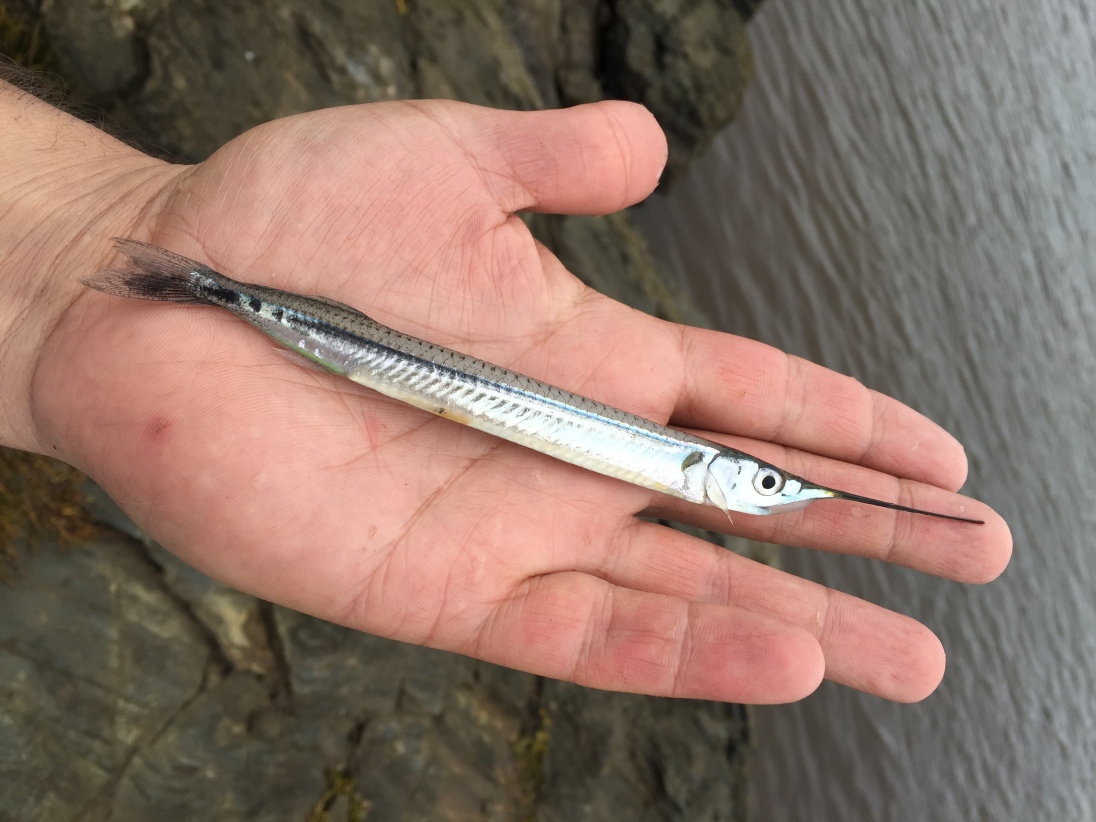